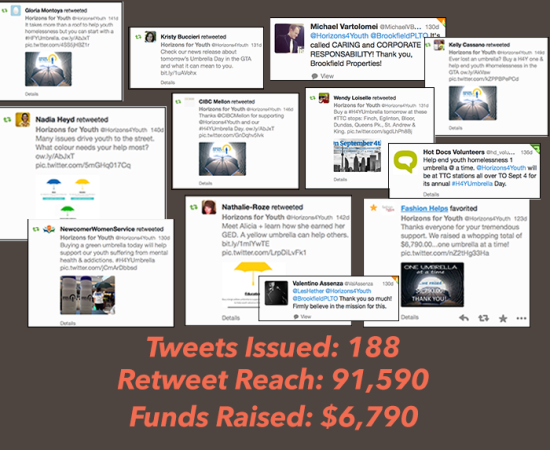 Challenge: From 2004 to 2010,  Horizons for Youth (H4Y), a Toronto youth shelter, ran an annual Umbrella Day fundraising event.  It entailed selling umbrellas to commuters across the city, via pop-up booths in subway stations and corporate sponsors’ foyers.  Funds from each umbrella purchased supported after care services for homeless and at-risk youth in the GTA.

I was invited to help re-launch H4Y’s legacy umbrella fundraising campaign in a new time slot, with a fresh approach and social media. The strategy needed to build momentum during summer months leading up to Umbrella Day on September 8.

Implementing a Solution: Working within a volunteer committee, I collaborated with the shelter’s Executive Director, staff and other volunteers to develop a new approach: Offer commuters their choice of three different umbrella colours, with the proceeds of each going to programs/services that address one of three issues –

I developed an integrated marketing communications plan with web, social media, sponsorship, earned media, volunteer tools and tactics leading up to and including the event day.  However, I focused on developing the web content and implementing a social media strategy through Facebook and Twitter.

Using the hashtag #H4YUmbrella, I developed an Excel editorial calendar to schedule two to seven tweets per day (depending on the day of the week) and one Facebook post per day for the month leading up to Umbrella Day.  To optimize engagement, I allocated an image or URL to each tweet and an image to each Facebook post.  Content for the tweets/posts: promoted the date, event and locations; communicated and quizzed the community about the meaning of each umbrella colour; provided thank-you callouts to in-kind and monetary sponsors; and provided HFY/youth homeless stories and stats, using campaign relevant words like shelter, open, umbrella and rain.

I worked with the team to post the content and ad hoc tweets/posts to acknowledge, nurture and thank supporters through callouts or respond to questions.

This bar graph shows the escalating Twitter results leading up to Umbrella Day. It was generated in Tableau.

Most importantly the social campaign, along with other tactics, raised $6,790 for the youth shelter’s after care services, and created a template for future campaigns.